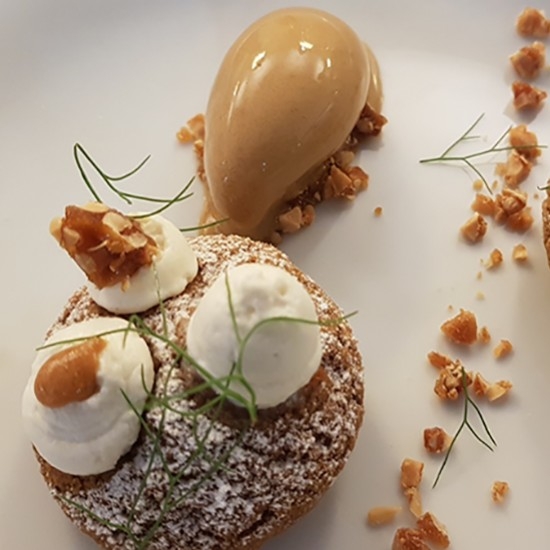 • 250 g of nougatine peanut (that is half of the recipe of the nougatine, realized beforehand)

The day before, to gather all the elements of the sherbet in a pan, and to carry the whole in 90°C, without ever boiling.
Mix regularly, until total fusion of powders and of Zan.
Free in bowl to Paco Jet (turbine with ice cream), and freeze in -18°C.

The cream in the fennel:

The day before, to warm the single cream in approximately 65°C, to melt the glucose there, then to put in it infusing the seeds of fennel, the wild fennel, the star anise, half of the aniseed apéritif, hanging approximately 15 mn.
Free, film, and keep until the next day.

The next day, to warm again the infused cream, always without boiling her just to make her enough liquid.
Filter the cream, throw the elements of the infusion.
Pay the cream on the mascarpone, the sweet condensed milk and the rest of the aniseed apéritif.
Mix quite approximately two minutes, then reserve for the cool.

Preheat the oven in 250°C.
To the drummer, mix in the sheet all the elements of the cracker until have a homogeneous dough.
Spread him between two sheets of sulphurized paper in approximately two millimeters, then let congeal at the cool.

In a pan, bring to a boil the milk, the water, the salt, the sugar and the butter.
Reduce the fire, and when all the butter is melted, to add the sifted flour in rain, without stopping moving in the spatula (never in the whip, which shall risk to give too much elasticity to the dough).
Work the dough on the spatula, always over a low heat, to dry well what we call the "bread soup".
It is ready when you shake the pan of front behind and when the bread soup gathers together perfectly without sticking on edges.

Once this stage was reached, free the bread soup in salad bowl, and let warm it a few minutes. Add eggs one by one by mixing in the spatula.
The dough is ready when it makes a firm "beak" at the end of the spatula when you take out it of some mixture.
This texture arrives at the end of 4, or 5 following eggs how you dried out the bread soup.

Free the device in pocket, then sleep cabbages regularly on a plate with a parchment paper, by counting two rooms a person.
By means of a punch, detail circles of cracker hardly bigger than the size of the cabbage, and put down a circle on every cabbage.

Put in the oven the plate, and put out immediately the oven.
Let cabbages develop approximately 15 minutes, then relight the oven, in 160°C this time, and let cook cabbages additional 15 minutes, without ventilation and open vapor.
Until it that they are cooked, never to open the door of the oven.
Once cooked, let cool at room temperature.

The nougatine and the praline :

In a pan, gather peanuts, caster sugar and net of water.
Cook the whole in the caramel (near 150°C), by moving regularly not to burn the sugar or make it mass.
Free immediately on a plate with a parchment paper, and well spread over all the surface to help in the cooling.

Once motionless and cooled, to take half of the nougatine.
Break it in small pieces, then put her in the bowl of a mixer, and mix at maximal speed until the obtaining of a brown, oily and slightly granular semi-liquid dough: the praline of peanut.
Book.

Get back the aniseed cream, then go up her, rather firm, to the drummer.
Free her in pocket provided with a fine close cartridge in the rear.

Pacosser the sherbet in the turbine.

By means of the index, drill a hole on the flat part of cabbages.
If they are made a success, they should be hollow.
Fill this hollow with two/three peanuts in nougatine and the praline, up to approximately a third.
Fill following two thirds of aniseed cream.
Put the cabbage on plate, flat face against the plate.
Repeat the operation to have two cabbages on the plate.

Decorate the plate by strewing with chopped nougatine, then cabbages by putting down three walnuts of whipped cream on each of them, and surmounted for one of the caramelized peanut, for other one of the small shoot of wild fennel (or if not, a peeling of dill), and finally the last one of a petit point of praline.

Put down a quenelle of sherbet to finish.