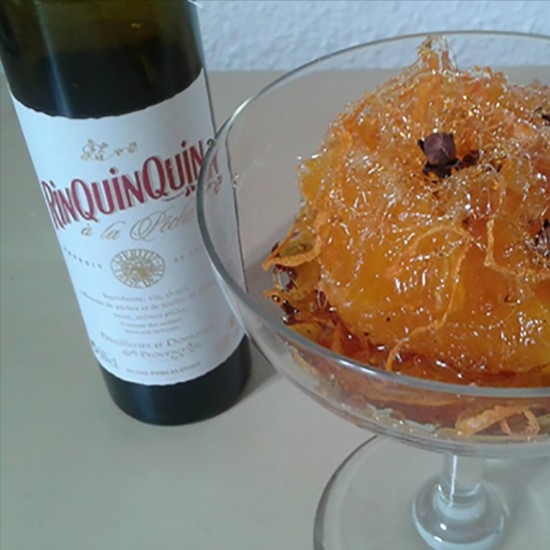 Peel the oranges, remove the white skin of each orange and cut them in 2. Immerse them in two baths of sugar syrup, 15 minutes of cooking from the boil.

Reserve the zests in a cup filled with cold water.

Reconstitute each orange and place them in an airtight box.

Add 20 cl of RinQuinQuin, the cinnamon sticks, the cloves, 100 gr of sugar.

Place zests and oranges 24 hours in the refrigerator.

Drain and dry the zests.

Remove the cloves and cinnamon from the marinade of the oranges, place the oranges in 6 cups.

Heat 150 gr of sugar and 5 cl of water in a saucepan over medium heat.

As soon as you get a toffee, add the zest and mix.

Place the oranges in the cups, spread the zest with a fork and pour the caramel at the bottom of the cups.

RinQuinQuin is a white wine-based apéritif from the Lubéron, with the peaches of the valley of Durance, with leaves of peach trees picked in autumn, with sugar of cane and with alcohol.