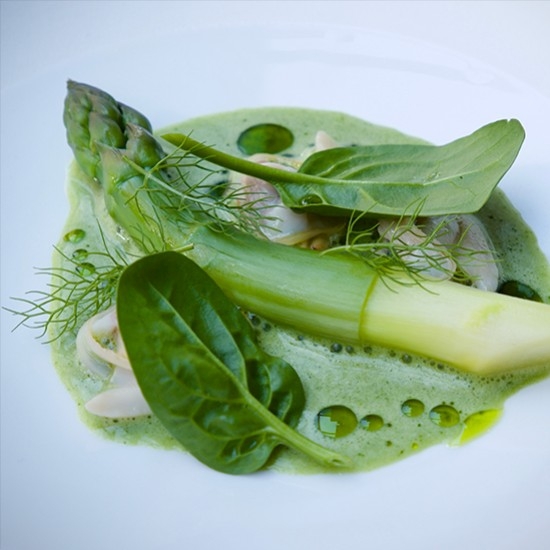 The cream of asparagus soup :

The oil of fennel:

Peel and crown asparaguses.
Steam them 3 minutes then season them of a dash of olive oil of flower of salt and pepper of Sarawack.
Have on plates.

The cream of asparagus soup :

Clear the fineries of asparaguses for which or soft.
Place all the ingredients in one pans and bring to a boil.
Mix deeply then cross in the Chinese stamen.
Verify the texture then season of salt.

Wash and déssabler clams several times to eliminate the sand.
Steam them 2 minutes only.
Open them immediately then book them in their juice with a dash of olive oil.

The oil of fennel :

Mix all the ingredients deeply by paying attention not to warm the set.
Cross in the Chinese stamen and reserve for the cool.

Raise in soup plates by placing clams then asparaguses on the softness, decorate with sheets of spinach and the peelings of fennel, pay a dash of oil of fennel on every plate.