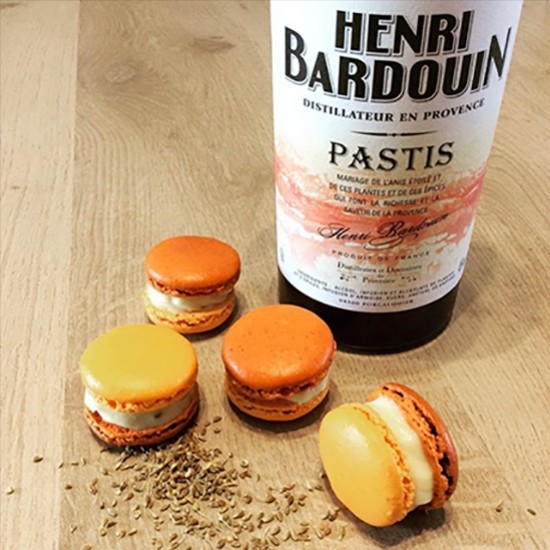 Macaroons in the Pastis Henri Bardouin by Cécile Millet of @mysteretmacarons

Ingredients for the lower jaw:

For approximately 40 macaroons.
The lower jaw gets ready the day before, the hulls the next day, and macaroons taste two days later.

1 / Preparation of the lower jaw:

Always prepare the lower jaw watches over it so that it has time to set at the cool and so that so, she behaves well.
- Cut the chocolate in small so necessary pieces.
- Put it in a small salad bowl (I use a bottom of hen).
- Melt the white chocolate in the bain-marie.
- Mix with a maryse so that there are not pieces anymore.
- At the same time, make warm the cream to in the shiver in a pan.
- When the chocolate is melted well, pay the cream in 3 steps into the salad bowl by mixing in the maryse; the obtained lower jaw must be very smooth.
- Off the heat, add one by one, the soup spoons of Pastis HB (do not hesitate to enjoy), mix in the maryse.
- Add the green anise and mix.
- Pay the lower jaw into a dish (I use a gratin dish).
- Film in the contact at once.
- Let cool then reserve for the refrigerator until use the next day.

- Take out eggs so that they are at room temperature and separate the whites of the yellow and weigh them and put them in two different bowls. Reserve the yellow for another recipe!
- In a salad bowl that you will not choose too small, sieve the powder of almonds and the icing sugar, without mixing afterward.
- In the first containing bowl 75 gr of egg whites, add the colouring agent of your choice.
- Whip in the fork for the good mix it to the whites then pay the contents of the bowl on it " so much for so much " (almonds / sugar ice). Do not mix!
- Reserve aside.
- Pay the second bowl of whites into the bowl of your drummer.
- Begin to beat in average speed the whites.
- At the same time, pay the caster sugar and the water into a pan.
- Bring to a boil to mix it by measuring the temperature with a thermometer.
- When the syrup of sugar reaches 118 °C, stop the cooking.
- Let lower the temperature in 115 °C.
- Overturn quite slowly into the bowl of the drummer while this one continues to beat the whites.
- Stop the drummer as soon as the syrup of sugar is mixed, you realized an Italian-style meringue!
- Let lower the temperature of the meringue in 55 °C.
- Pay the meringue into so much for so much and macaronnez in the spatula: that is, mix delicately by lifting to mix him from the outside inward of the salad bowl, you can crush the device with macaroon against the wall of the salad bowl to return him more fluid but not liquid. You have to obtain a supple and brilliant device.

- fill a piping bag (diameter 8) with the device with macaroon.
- Prepare a cooktop with some parchment paper.
- Poach macaroons by watching that the cartridge, tilted vertically, affects almost the paper. Bang slowly the plate from the point of view of work to eliminate air bubbles. Begin again until you have no more device with macaroon.
- Let "eat" (you make them "dry") 30 in 45 minutes before putting in the oven in an oven preheated in 160 °C.
- Cook 14 minutes. During the cooking, open briefly the door of your oven (at about 8 minutes of cooking approximately, when the ruffle is trained) to evacuate the humidity which could cause craquelure on hulls.
- Let cool plates then unstick macaroons delicately.- Assemble them by pair of identical size and turn them so as to be able to fill them.
- Take out the lower jaw of the refrigerator.
- Mix it delicately.
- Fill a piping bag.
- Poach a ball of lower jaw on one of the two hulls of every pair.
- Recover some second hull.
- Book in a fresh place until the next day, macaroons will be there only better!Do not especially put them in the refrigerator, they would risk to take the humidity and to soften; keep macaroons on a tray covered with parchment paper.
Macaroons keep 5 days.