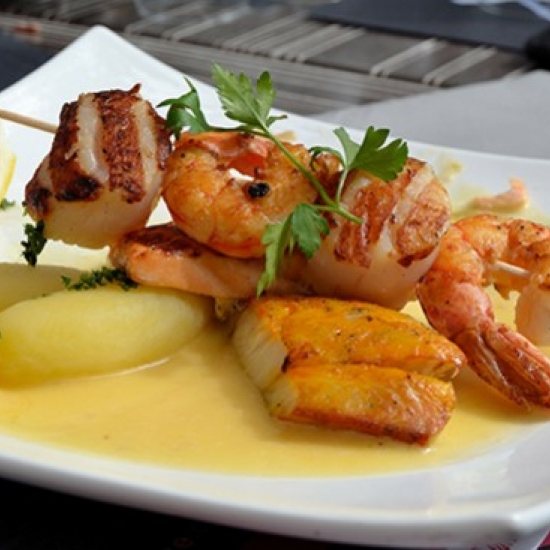 Salmon brochettes in the Pastis Henri Bardouin and baked potato

• 1 jar of cream in Herbs and Sea salt from Guérande

Cut the salmon in thick enough cubes to hold on a peak brochettes.

Peel the red onion and cut it in districts.

Then pay into a salad bowl the sauce soya, the olive oil, the Pastis Henri Bardouin, the rum

And the honey. Pepper and mix until homogeneity.

Pay the cubes of salmon into this marinade, add the red onion

And mix. Then let marinate approximately one hour.

Before the meal, put the oven to be preheated in 200°c.
Wash potatoes and pack them in the aluminum foil.
Drill several holes with a fork to avoid that they burst
By cooking and to put in the oven for 45 minutes.
Distribute then on 4 peaks with brochette the marinated cubes of salmon,
By separating every cube of a piece of onion.
After 35 minutes of cooking of potatoes, add in the oven brochettes for additional 10 minutes of cooking.
When it is cooked(we've had it), to raise every brochette in a plate.
Serve with a potato cut in two, furnish with a generous spoon
Of cream in herbs and sea salt from Guérande.
Photo credit: Adobe Stock - Graphlight
Print the recipe