4 rare and precious ingredients have been added to enrich the original 65 botanicals of the classic recipe to create our Pastis Henri Bardouin Prestige:

An ode to singularity, this innovative creation shakes up the traditional codes of pastis with a new aromatic sensation.

It took time and inspiration to find just the right combination for this new Prestige recipe, with its perfect balance on the nose and in the mouth…..

Apart from the classic ingredients that go into Pastis Henri Bardouin there are four additional plant extracts.

The vetiver comes from India, and is picked just at the moment when its herbaceous fragrance is as its height.

The saffron is grown around Forcalquier, and is picked in October/November in full flower. Picking the flowers is a delicate operation, “they must be picked before they are completely open, before the bees have been able to deposit pollen on the pistils,” explains Adeline Pincet, a saffron grower in Forcalquier.  It takes one hour to hand pick 500 flowers and two hours to snip off their pistils of 3 stigmas with scissors, and 200,000 flowers to produce 1 kilo of dried saffron stigmas.

The centifolia rose is cultivated in Morocco and Iran. It is picked by hand in the early hours of the morning in May, before the heat of the sun becomes too strong. Also known as the cabbage rose, it is extremely fragile and must be picked without damaging the new buds that will open later…

The Sichuan pepper comes from the province of Sichuan, in south-west China, a magnificent high altitude mountainous region. Although it is commonly called “pepper”, it is not actually a member of the botanic family Pipper-Nigrum but rather that of the Rutaceae family, which includes orange and lemon trees. This affiliation gives it a distinctively fresh, lightly piquant taste. It is not the seed inside that is consumed, unlike classic pepper, but the red husk that surrounds it, which is in fact the fruit.

It is harvested in autumn, and the hard black seed which is too bitter to eat is discarded, leaving only the outer shell. Its indigenous name “ma la” means “spicy and anaesthetising”. And the miniscule peppercorn was once highly sought after by doctors for its analgesic quality, and also by religious orders who considered it to be a prized offering.

The maceration techniques for Pastis Henri Bardouin Prestige are identical to those used for the classic recipe.

The incorporation of these four new ingredients into the classic recipe of 65 herbs and spices is skilfully coordinated in a precise order and according to the quantities. It is a key stage before analysis and meticulous tasting. 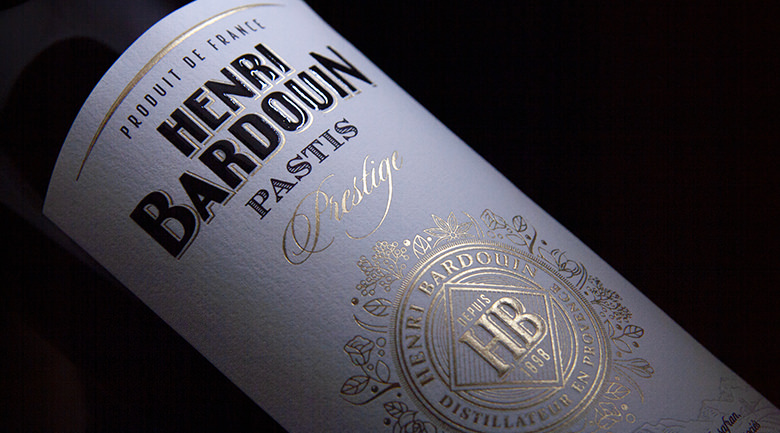 Pastis Henri Bardouin Prestige is Pastis Henri Bardouin’s most elaborate recipe. Its aromatic richness gives it a unique taste, its extreme finesse caresses the palate, and its refinement means it does not alter the dishes and wines that may be consumed afterwards.

Pastis (Provençal Occitan pastisson: paste or mixture) is the name given to alcoholic drinks flavored with anise and licorice.
In Occitan, pastis also means trouble, a problematic or confused situation: what a "pastis"!

One plant is the basis of Pastis: anise. It is estimated that anise was already used at least 15 centuries before the common era. Grown on the southern coasts of the Mediterranean, it is believed that the use of anise was known to the Egyptian civilization for its abilities to treat the gums, teeth and cardiac diseases. The use of this plant spread starting in the 15th century before Christ in Greece, then in Rome for its aperitif properties and its refreshing power. Anise also comes within Chinese traditional medicine in the treatment of diseases of the urinary tract, to improve digestion and even to stop hiccups... In India, a "strong spirit" of alcohol with anise based on star anise has been prepared for centuries. This is undoubtedly the most direct ancestor of our pastis.
Anise came into France through Marseille with the Moorish invasions (around the year 730) and later with the Crusades (between 1095 and 1291)....

Drinks based on anise were traditionally made in families from plants available in the environment. These plants were placed to macerate in alcohol and the infusion obtained was used to give a scent to the water and to refresh. These recipes, more or less complex and varied from family to family, incorporated all anise plants (star anise, green anise, fennel, etc.).
Absinthe was prohibited in France in 1915. For five years, the prohibition affected not only absinthe, but also similar spirits. In 1920, under pressure from distillers, the law authorized aperitifs with anise on the condition that they did not contain absinthe, that they were not be green, and that the alcohol did not exceed 30°. In Provence, it was the beginning of a veritable "little yellow" craze. Refreshing and especially economical (one volume of liqueur for five volumes of fresh water), it became the star in bars. The brands multiplied, which jealously guarded the secret of the mixture and proportions of ingredients used: green anise, star anise, or fennel, licorice, natural plant extracts and macerated or distilled alcohol. Consumed in moderation, pastis then became synonymous with blue skies, the beach and sunny summer days. The word "Pastis" appeared in 1932. It was then that Paul Ricard made a new recipe based on green anise, star anise and licorice. The presence of licorice in an alcoholic drink with anise was a great novelty. It was an immediate success, pastis was even sold on the street, by shouting anise sellers. Thus, in 1936, with the arrival of paid vacations, pastis took on a connotation of "vacation drink" and sales literally exploded.
It was necessary to wait until 1938 for the law to authorize a 45% alc/vol: the ideal alcohol content.
However, in 1940, there was a new prohibition on pastis: accused of weakening soldiers facing the enemy, it was held responsible for the French defeat! A network to smuggle anise essences was established. Pastis lovers would not be discouraged, and they made a homemade pastis by diluting the essences in alcohol.
In 1951, aperitifs with anise were again authorized, this time permanently.
At the end of the 1980s, different, more complex pastis appeared, aromatic mixtures created by maceration. HENRI BARDOUIN started it.
The new pastis was born.

The first references to pastis from the Distillerie de Lure were found on an advertisement that appeared in 1935: the Paulanis, from the name of the owner at the time, Paul Ferréoux.
When Henri Bardouin became a distiller in 1946, he changed the name from Paulanis to Diamant and distributed it in local bars.
Henri Bardouin was the first to think of concocting a more complex pastis.

In 1986, the Distillerie de Haute Provence developed a new pastis recipe based on plants called Occitanis.
Diamant pastis is preserved like standard pastis. It is intended for bars. Occitanis is for retailers.
In 1990, when the company became Distilleries et Domaines de Provence, Henri Bardouin Pastis was born: an evolution of Occitanis pastis to which more exotic spices are added which will contribute to its famous reputation.

As for the classic Pastis HB, certain plants, such as thyme, rosemary, savory, and sage are harvested from the terroir of Forcalquier itself. The exact place and date vary each year. Other plants, such as the spices, naturally come from further afield, China for example for the star anis or Syria for the liquorice.
What differentiates Pastis Henri Bardouin Prestige is the addition of four rare and precious ingredients: a distillate of centifolia rose, an infusion of saffron from Forcalquier, and infusion of vetiver from India, and an infusion of Sichuan pepper.

Once picked and dried, we extract the aromatic constituents from the plants by macerating them in a hydroalcoholic mixture (water + alcohol). The temperature, time, the degree of alcohol and the right quantity of the plant enables us to obtain the desired taste. The liquid is then run off to separate it from the plant matter.
Distillation
We distil the plants, the flowers and the spices in alcohol to extract numerous aromas. In this way we obtain distillates, or spirits (from the latin “spiritus” used for the product of distillation which was seen as the soul of an alcoholic drink).

It is by blending infusions and distillates of plants and spices that we obtain Pastis Henri Bardouin Prestige.
To ensure that the qualities of the product remain constant, it is subject to analyses and tastings by specialists. These essential verifications take place at all stages in the production process.
The final blend must be perfect and result in the symphony of aromas and fragrance that characterizes Pastis Henri Bardouin Prestige.

The last stages include a final filtration to ensure that the pastis is clear and stable (and particle free), plus an ultimate tasting. It is the master liquorist who gives his final approval, after which the product can be bottled.

Pastis Henri Bardouin Prestige is an excellent aperitif, traditionally served with six volumes of water for one volume of pastis. It is a premium pastis which requires more dilution that an industrially produced pastis to truly appreciate its aromatic finesse. But, everyone is free to drink it as they prefer, according to their taste and the temperature outside.

Pastis Henri Bardouin Prestige is brilliant saffron yellow, intensified by the presence of saffron in the blend, with iridescent green highlights due to the presence of certain plants such as artemisia and liquorice.

The nose is finely floral thanks to the presence of rose. The Sichuan pepper and vetiver add spicy notes, underpinned with the saffron that confers lightly woody aromas.

Palate:
The palate opens softly with floral aromas followed by a structured evolution thanks to the saffron, and aromatic complexity thanks to the spices and the rose, finishing with great persistence. It is more complex and refined in the mouth than our Pastis Henri Bardouin Grand Cru.